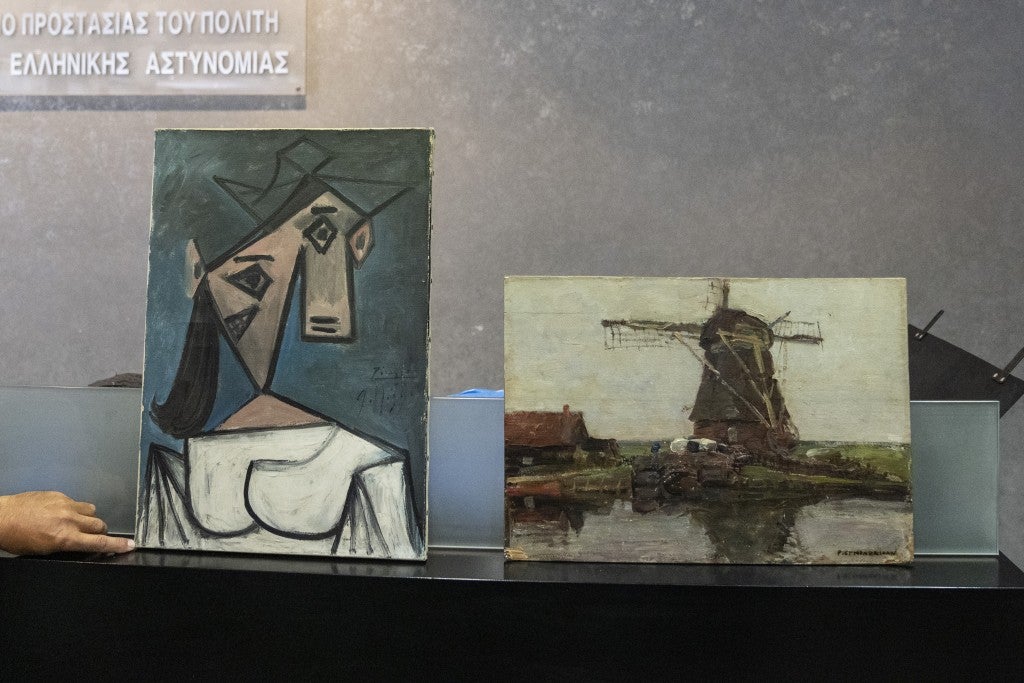 As the authorities announced on Tuesday, Picasso’s “Woman’s Head” and a work by the Dutch master Piet Mondrian, “Stammermühle mit Sommerhaus”, were stolen from the Athens National Gallery in January 2012.

They were recovered, wrapped in plastic sheeting and hidden in a dry river bed outside Athens after the suspect was arrested for questioning.

The Cubist-style Picasso work by a woman was given to Greece in 1949 with a dedication “in homage to the Greek people” for its resistance against the German-led occupation in World War II.

“This painting is of particular importance and emotional value, as the great painter personally dedicated it to the Greek people for their struggle against fascist and national socialist (occupying) powers and bears his handwritten dedication,” said Minister of Culture Lina Mendoni.

“As a result, it was impossible not only to sell this painting but to display it as it would be instantly identified as stolen from the National Gallery.” The National Gallery recently reopened after a nine-year major renovation that was delayed by months due to the pandemic. Mendoni did not say when the recovered works would be exhibited again.

The suspect is a Greek who is said to have acted alone, said the police. They investigated his claim that a third stolen work, a 16th-century drawing of a religious scene by Italian painter Guglielmo Caccia, was found.

Police did not provide any information about the suspect’s location and the paintings, but found that they had recently been taken to the dry river bed, apparently following reports in Greek media that authorities were on the verge of arrest.

“The restoration of the works of Picasso and Mondrian is a great success,” said Minister of Public Order, Michalis Chrisochoidis. “The police have worked systematically, collaboratively and creatively, and for that they deserve praise. In the new National Gallery the (paintings) get the space they deserve. “

Indiana Meals Banks are getting ready for improve and enlargement